"The tire is defective" More information

I hear that statement quite often and will admit it is a bit of a "hot button" for me. For a good part of my 40 years as a tire design engineer I was tasked with doing Forensic level tire inspections and issuing "white paper" engineering summaries of the findings of the results of my inspection of tires that had failed. My inspection was not simply looking at the tire and saying "Yup it failed". I was expected to learn and identify the reason, the Root Cause for the failure, and to issue a report to management or even the auto company engineers. In a number of cases the report could be simple such as: "The tire suffered a belt separation at x thousand miles. The separation initiated between the two steel belts on the serial side and progressed until the tire failed. The bead area showed signs of under-inflation/overload."    or    The tire suffered a "Run Low Flex Failure which resulted in the melting of the polyester body cord as seen here. 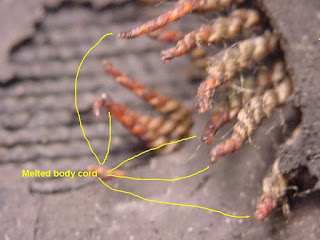 It would never be acceptable for me to say "The tire failed so it obviously had a defect".

I gave a short list of examples in my post of Sept 20, 2015. Improvements can not be made in tire production or in the manufacturing of any product if you only say "There was some Defect" for without knowing and clearly identifying the actual defect there is no way to know what material or process needs to be changed or improved to make the product better.

While simply saying the tire had a "defect" means you can't be sure that simply replacing the tire with a new one or even a new tire from a different manufacturer will prevent a re-occurrence of another similar failure.

Tire failures come from a number of different Root Causes. Some have nothing to do with the tire itself. These can include wheels that are porous like this one, 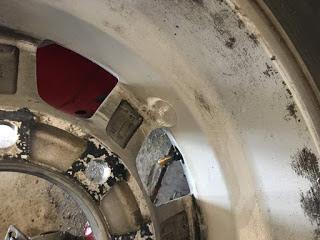 other wheels can develop cracks so they leak air, or are even the wrong size as seen here. I have previously covered the variety of "failures" that involve leaking valves.  Many failures are from external causes as seen in these examples.

Now some may feel that because I worked in the tire industry I always want to blame the consumer but this is not the case. In fact I am personally responsible for one recall of over 8,000 tires based on my inspection and research that identified the root cause for the failure was a tire plant manufacturing error due to improper identification tag on a pallet of a specific rubber compound. Others had already seen the tires and decided they were "defective" but they stopped there and did not make the effort needed to properly identify exactly what the "defect" was.

While I understand that consumers really are only interested in getting back on the road. But if the reason for the failure was not something in the tire you can end up with another tire failure in your future.  If you have a failure and really care about the facts I may be able to help. First you need to keep the tire if possible. Get good overall picture IN FULL SUN LIGHT, Also some close-up pictures, Close enough that you have no more than about 12" of the tire in each shot.. Email me the pictures and I will be happy to work with you so we might learn the real cause.