How to select a tire brand 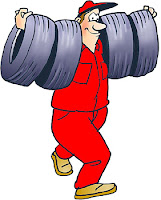 I read numerous posts on RV and other forums concerning the perceived quality of tires made in different countries. Among large 5th wheel trailers there seems to be a large percentage of owners who believe that all tires made in China are just failures waiting to happen.

What few seem to understand is that if all the tires on a single application, like large heavy 5th wheels, come from the same source then if a majority of those vehicles are overloaded (which can make any tire fail prematurely) there will be a higher percentage of failures due to the overloading and not because where the tires were made.

Maybe the bottom line solution is to go to Goodyear, Michelin, or Bridgestone Firestone as first choice then as a second second choice, Tire Rack, Big-O, Pep Boys, Costco, Walmart, Sears, Sam's Club or BJ wholesale club or another large tire retailer with a nationwide presence.

With a larger company you are much more likely to find someone who will stand behind the tires they sell. And you'll be dealing with a company that has a vested interest in selling quality products.

I believe that if you buy a tire at one of the three major manufacturers, who all sell imported tires from various countries, there's a good chance that any import tire they sell has been reviewed to ensure it meets U.S. market regulations.

I have personally been involved in evaluating tires made in USA, Canada, Mexico, Venezuela, Chile, Japan, Argentina, Brazil, Spain, and China and can assure you that they all were expected to meet identical corporate quality standards as they were all sold through company stores.

Since most customers have no idea about where their tires were made, they do remember the name of the store they bought them from. So, naturally, the large tire companies do not want their name associated with poor performance.

Another advantage of dealing with a large company is you have a better chance of finding service no matter where you travel than if you buy form the one and only Billy-Bob-Jo's Super Cheap Tire Emporium and Bait Shop.
Posted by Tireman9 at 9:32 AM 7 comments:

Why Do Tires fail #2

We need to have a better understanding why tires fail if we are to prevent or decrease the probability of another failure occurring in the future.

In the first post of this series, I said we need eliminate punctures or impacts when we investigate a claim of "defective" tire, as these external forms of damage have little or nothing to do with tire design or manufacturing process.
Some punctures are easy to identify. 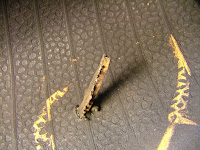 This puncture was made by a piece of aluminum which based on its shape appears to be a piece of an aluminum rim from a broken truck rim. 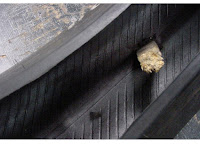 Or small piece of metal 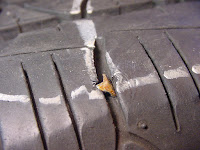 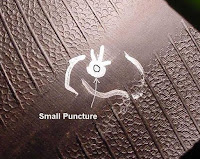 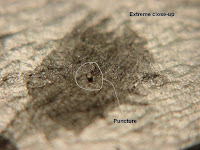 This appeared to be a piece of steel like a straight pin that was only 0.01” diameter. If I hadn’t been checking my tires frequently (before I had TPMS on my car) I would not have know I had a puncture or was losing air. I could have suffered a run low failure.

here is a puncture that caused a slow leak but in this case the owner probably just kept adding a little air each week rather than pay to have it properly fixed. In this case the sidewall did not flex enough to melt the cord but the tire did run hotter than normal for many miles. This extra heat degraded the rubber which ultimately resulted in a loss of enough strength that the belts detached from the body.

In this case the initial inspector decided the tire was defective. However I think you will agree that a tire being punctures and the owner not repairing the puncture was the real reason the belts came off the body of this tire and not the fact that the tire was built in &X%*$ or the tire builder spoke in C*!%@@+.

Impact damage can be masked by subsequent damage but here are a couple examples.
Looking at the interior of this tire 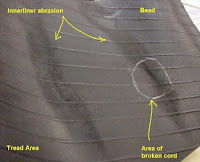 shows that this impact was so severe the bead area of the interior of the tire (right side) was folded enough to rub against the interior under the tread.

In this case the impact broke a number of body cords in the sidewall due to the sudden impact.

I hope I have shown that failed tire analysis takes a detailed inspection if you are going to learn if the tire suffered external damage or had some other cause for the failure.
Posted by Tireman9 at 3:15 PM No comments: