Here is a post from, July 22, 2012. The owners of this Airstream continue to use the word "defect" but also fail to identify the defect. I also see no signs of them running a TPMS. 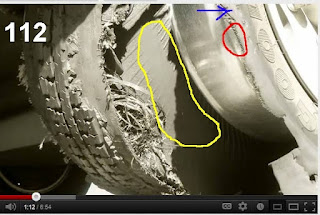 In the previous post, I covered Run Low Flex Failure, RLOF, and how there were telltale signs or physical evidence that while each taken individually are just circumstantial in nature but when taking as a whole make a very strong case for the tire having been operated for a number of miles at very significant air loss. In this post, I want to walk you through the thought process of a forensic analysis of the evidence that is available and show how an opinion or conclusion is reached. 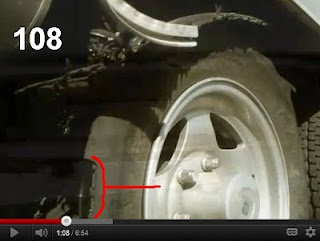 First I need to tell you that I have not had the opportunity to personally inspect the subject tire, but there is a YouTube video and I will show you some shots from the video and tell you what I see in these shots. Second I cannot tell you about the individual as I have had only limited correspondence about this tire failure but according to statements in the video they called it a "Blowout", said they had checked the air pressure in the morning and had only driven about 45 miles before the loss of air occurred. 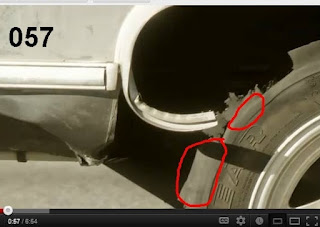 So lets see what the pictures show. I have highlighted the area of interest in each picture. In pic #112 we see in the yellow area signs that the interior of the tire was worn from abrasion on the inside of the tire under one side of the tread rubbing on the inside of the tire above the wheel. This occurs at 0 psi but takes more than the half mile it takes to come to a stop to wear this much. Also the tire must still be in one piece such that the tread can uniformly contact the lower interior of the tire so the wear occurred before the tread part of this tire broke away. In the red area we can see a few dark holes where the body cord has melted and shrunk back into the tire structure. This occurs when the body cord exceeds 390°F. To put this temp in perspective properly loaded and inflated tires may get to 160°F and ultra high speed tires such as seen at the Indianapolis 500 may see 200° to 210° but rubber starts to come apart an just a little more than that. 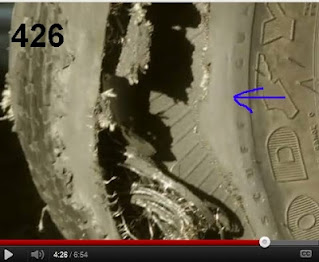 In pic 108 is another view of the same location of melted body cord. If the cord had simply failed due to high pressure the cord would be frayed. Also note the nice circumferential line the failure took. More on that later. 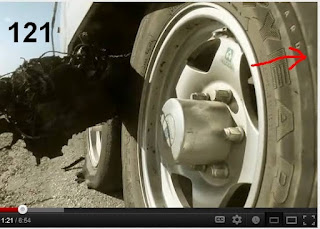 Moving on to picture 057 note the areas circled in red. An alternate view is seen at the arrow in pic 426. Now if we compare the loss of the ridge that is easily seen in pic 121. What this means is that the upper sidewall was in contact with the road surface for a number of miles and the outer edge of the sidewall "Scuff Guard" raised rib has been completely worn down. What we do not see is the lettering of the "Scuff Guard" worn away so we know that the wear was not due to the trailer being repeatedly parked against a curb.

Now I am sure some are wondering how I can tell the difference between running a tire at 5 psi vs 0 psi. Well here are some shots from an experiment I ran myself a few years ago. 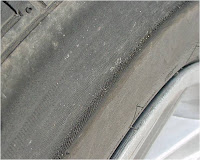 This first picture here on the left shows the wear of the upper sidewall that occurred in only 3.9 mi while the tire had a minimum of 5 psi cold inflation. This is a bit like the wear on the RV tire sidewall 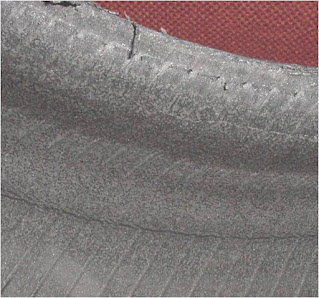 The next picture is of the interior of the same tire. You can see the nice circumferential crease/crack that has formed. This tire did not generate enough heat to melt the body cord as I was driving at less than 10 mph for the 3.9 mile test. That crease is at the location up the sidewall similar to where we see the circumferential failure in the "Blowout". Note there is no contact between the inside of the tread and the inside of the tire above the wheel as seen in the RV tire.
If you look at some of the examples shown in the previous post you will note that many show the same nice circumferential failure line.
Here are some examples that I use as ref pictures to help me understand the Root Cause of a tire failure. 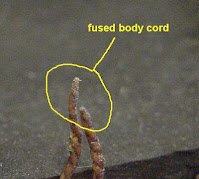 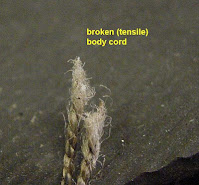 Here are pictures of melted body cord, broken body cord and the holes sometimes left when the cord heats up and shrinks as it melts. 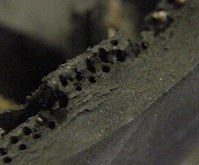 I hope this helps you see how easy it is to be mistaken when you think the failure is because of a defective tire when in fact the evidence shows the tire lost air, the Rv continued down the road at normal highway speed and after a few miles the tire "blew out". The only way to have some warning and to protect yourself against this all too often type of failure is to have a TPMS which will warn you as soon as the tire loses 10% of its air.


Bottom Line: I do not think this tire was "possibly defective" or a "crap tire". It did not "fall apart for no apparent reason". It came apart because it lost its air and the operator did not know till too late.
##RVT976
Posted by Tireman9 at 11:30 AM