Why do tire valves leak?

Many people who experience a tire blowout insist they had checked their tire pressure and that their gauge was accurate. So they blame the failure on a defective tire. However, what could have been the culprit was a bad cap on their valve.

Now I must say that if you have a TPM sensor that is basically a screw on valve cap, this warning probably does not apply as long as you ensure the valve stem is not dirty or covered in mud when you remove or install the TPM sensor.

A good valve cap is metal and has a small gasket or O-ring in it to seal against the end of the valve stem. The cap serves two functions. Primary is to keep dirt out. Second is to be a backup to keeping the air in if the valve core develops a leak. A cheap plastic cap may work on a 30psi passenger tire but I doubt it will last too long on a hot high pressure Class-A TBR tire. 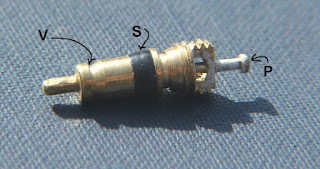 Lets take a close look at the valve core.

I have labeled the plunger that opens the valve to let air in or out "P". The gasket that seals the core inside the valve stem "S". Note the small indentation that indicates this core has been used but not over tightened.

Finally the location that opens when you press on the plunger "V" is a small circular opening.

To the right is a graphic from Wikipedia showing how a Schrader valve operates.

If you look closely you can see the valve opening letting the air out.

Now lets look at what can happen if you get a single piece of grit stuck in the valve area.

I included the head of a straight pin so you can see just how small that bit of dirt is.

Now lets see what happens if this valve core with the grit in the valve is used on a tire. 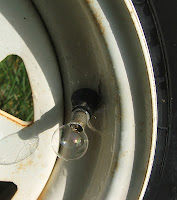 Now you see why using a good valve cap is important. You must keep the dirt out of the valve area. If you discover a leak as shown in the picture above, cranking down on the core will only damage the core seal (the black band in the pictures above) and will do nothing to stop the leak. It is best to simply replace the core with a new one.