Had a question:
"My 2012 Airstream Classic came with Goodyear Marathon ST225/75R15 LR-D tires. I would like to tell you how many original installed tire I have had blowout using the original and same size tires as replacements. I even replaced the LR-D's with LR-E's and still only get about 3,000 miles before blowouts. It is the damage caused by the blowouts that concerns me most. I am tired of fixing my trailer after blowouts.

As I alluded to in my earlier message, I owned an Alpha 5th wheel that had 16" wheels as the original size. After 5 blowouts in one 6,000 mile trip I replaced the tires with Michelin LT235/75R16 XPS RIB (All Steel) tires. These tires are made with steel sidewalls. Many thousands of miles later I traded the trailer for my present Airstream without any more blowouts on my Alpha.

I have another question that does not appear to have a good answer....If trailer tires are so good and must be installed on a trailer when truck tires wear so much better, what is the rational for requiring the ST's on a trailer? My truck, 2002 GMC Duallie uses LT tires and I can not wear them out not blow them out before I feel it is safe to replace them (7 years). I am running LR-E' LT types on my truck.

I am sorry to say that I do not agree with the idea that ST tires for trailers is the safest and best option.

The selection of tires to use on any vehicle is up to the RV company. As far as I can see they select tires based only on load capacity, physical size and cost. I don't know what the RV company actually pays for ST tires but it is probably less than an LT of equivalent load capacity.

If your only concern was for lower cost when comparing two tires of equal load capacity and the ST tire was easier to fit (it was smaller and did not require you make larger wheel wells), Why would you select the higher cost tire?  If you don't offer a meaningful warranty, you do not face the expense of warranty costs if there is a tire failure so what is the incentive for the RV company to spend more?

I occasionally  see posts from folks complaining about some tread or sidewall condition but either they can't properly describe the condition or if they have pictures the image is too small, poorly lit or from too far away to allow proper inspection of the condition for me or others to help and offer an opinion.
I recently wrote this post:
Some general guidelines and suggestions for taking good pictures of tire conditions.


Full sunlight and NO flash.
Set the camera to maximum pixels or max quality
Take close enough to only include 8" to 10" of the tire surface. Closer if you have a camera that allows "Macro" or close-up.
If all you have is a phone you need a minimum of 10 Megapixles.
Only use "Optical Zoom" not digital zoom if possible.


Here is an example of a good quality tire picture that would allow someone to make a judgement on a tread surface complaint. 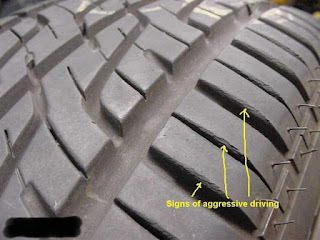 The following, while showing an obvious problem really would not be good enough to show a sidewall or tread cracking complaint. 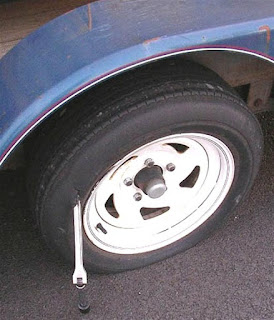 Email ThisBlogThis!Share to TwitterShare to FacebookShare to Pinterest
Labels: Photograph

Do you have to replace valve stems when installing TPM sensors?

Got this question on an RV forum:
"I understand from the thread that you should use metal tire stems with TPMS caps. The ends of the tire stems on our trailer are metal with the only visible rubber part right where they go through the wheel. I am guessing these are still considered rubber stems and should be replaced prior to installing TPMS?"


"Metal" stems can be a bit misleading as some newer stems may have some brass showing. I posted pictures on THIS post showing standard passenger rubber valve, a "bolt-in" metal valve, and a new style rubber/brass valve.
When it is recommended that "metal" stems be used, what is actually meant is "bolt-in". You will see the nut that retains the bolt-in stem on the outside of the wheel for most of these stems.

The concern is that over time (months or maybe years) the extra weight of TPM external sensors may cause some vibration and movement of the rubber stem body which might result is a failure of the rubber portion of the stem.

I am not aware of any testing done on the new style rubber/brass stems with a TPM sensor screwed on, so I and others are erring on the side of caution when we recommend "bolt-in" metal stems.

You could consider running your current valves until you get new tires and at that point have the bolt in valves installed. In the meantime, I would take a close look at your stems when doing your monthly visual inspection. You can push sideways a bit on the rubber/brass stem and look for any cracks. If you find any, that would mean you need to replace them sooner rather than later.
Posted by Tireman9 at 8:45 AM No comments:

I have had some folks who seem to want to replace Science with what they term "common sense".
In my opinion, this is why some people still think the Sun and rest of the Universe rotate around the Earth or that believe the Earth is flat or the Moon landing is a hoax simply because they don't understand the Physics and Science behind the stated facts.

I mention this because I continue to get people claiming that because they checked their tire pressure last week or yesterday and had a tire failure today, some sort of "magic" must have happened to cause their 65 psi or 80 psi tire to suddenly go sky high in pressure to cause the tire to explode due to high pressure. You don't have to do the technical research yourself just as you don't go to medical school to learn about some ailment you have. You do have a choice. You can trust your Doctor or go to Medical School or in the case of tire failure, you can put your trust in those who have spent years working on and constantly improving tire design, or you can simply believe that tires fail because of some unidentifiable "defect" that was built into the tire.

I have previously posted on how Sidewall Flex Failures can easily mislead the inexperienced into believing they had a "blowout due to high pressure." I also have some who do not want to accept the Science behind the need for tires in trailer application to run lower speeds and higher inflation in an effort to lower (but not eliminate) the probability of Belt Separation.

So I decided it is time to get out the "Big Guns" and cite some actual tire Science.

Here is a question from someone who took issue with my recommendation to increase the inflation in trailer application.

Yes, I have noticed that. I also know that the internal structural forces are different for torque than for high "slip angle" which is the situation in trailer application. Front tires on cars, motorhome or tow vehicles do go through slip angle but usually in the 1° range while trailer tires are subject to angles in the 10° and greater range. The forces are NOT linear. 10° can generate significantly more shear than 1°.

If you want you can purchase the software package HERE for the vehicle response and handling. The results of this vehicle simulation show the vertical and side loads being applied to tires as you drive around a corner. These forces can then be used as the input into Finite Element software programs to determine the structural loads on tire components.


Let's see if I can help. Here is a key phrase "the fatigue life of belt composites is predominantly influenced by the magnitude of maximum stress."  Now, think of the tire side bending when you back a trailer into a campground site.

I apologize for going so deep into tire engineering but sometimes the facts are needed to demonstrate that "common sense" doesn't always lead to the actual facts.  Before writing my posts on Interply Shear on trailer tires I had both vehicle simulation and tire structural shear forces run. We learned that for tires on multi-axle trailers, like RV trailers, the belt shear forces can be 24% higher than the belt shear forces of identical size, load and inflation tires on a motorized vehicle. This is why I suggest a different approach to tire inflation for trailer application than motorhome applications.


I will try and "lighten up" a bit in the next few posts.