These four videos were just released by Goodyear.
The info in these videos is good to know and follow.

Tim, the guy in the video, and I go way back to the late 70's when we were both working on racing tires. I was at a different company :-)

Even though this information is posted by Goodyear I strongly suggest you follow the advice given as sound technical advice is good to follow no matter who is the messenger.
Posted by Tireman9 at 11:52 AM 2 comments:

Do you have questions?

I can only guess at what your questions might be about. If you want to know something about tires post it as a comment here and I will make a list of topics to cover.
No guarantee, but if you don't ask, I may not think of the topic you want to know about.
Posted by Tireman9 at 6:58 PM 7 comments:

Email ThisBlogThis!Share to TwitterShare to FacebookShare to Pinterest
Labels: Questions

I was recently asked "What do you recommend for high pressure setting with a TPMS?"

The person said after driving about 50 miles in 92°F weather he was seeing 148°F on his right front and the left front went to 136°F on his Class A RV. His tire pressure monitoring system (TPMS) has a setting of 158°F for high temp. He wants to know; At what tire temperature should he be concerned when driving?

A couple of quick points.
If the TPMS is one of those that screws onto the end of the valve, then it is reading lower than the hottest part of the tire. If he has extension hose on the dual then the temp reading is even lower. I have tried to find a TPMS manufacturer that has data on the temperature difference but so far either they do not answer my email or they haven't bothered to do a test.

My information indicates that a properly loaded and inflated Class-A tire will probably see 140°F to 170°F operating temperature and these temperatures are OK as the tire is designed for this temperature range.

If you have actual side to side weight and know you are not overloaded, you may see temperatures in the 140 - 170°F range. If you see higher then I would be a bit concerned and want to know why.

Setting your TPMS Max warning temp to 158°F sounds reasonable to me.
Posted by Tireman9 at 5:24 PM 4 comments:

Tire Covers - Do they do any good?

I have seen some posts and comments about tire covers. One post caught my eye.

The owner was complaining about the cover degrading in the sun so he was of the opinion the cover wasn't worth the cost. I have to wonder how he failed to properly interpret the proof that the cover was protecting his tires. How would he answer the question: Which would you rather have degrade due to being in the sun? Your tires or the low cost cover?

As an Engineer I always prefer to have data rather than just someone's opinion. So I set up a quick test on my own RV.

As you can see I have covers for my tires. They were the second purchase after buying my rig. The first was a Tire Pressure Monitor System. 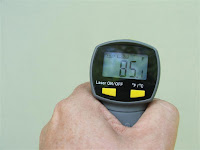 
Then I took the temperature of the side of the RV in the full sun. 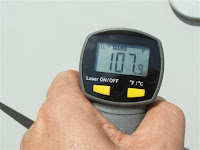 
Next the temperature of the white tire cover in full sun. 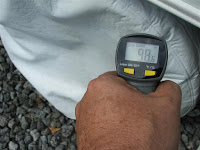 We get 98.6°F
I believe the cover is cooler than the side of the RV because air can circulate behind the cover.


I then removed the cover to see what the tire temperature was under it. 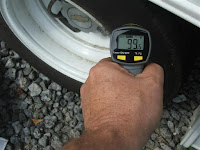 I then waited 30 minutes to see how hot the black tire got while in full sun. 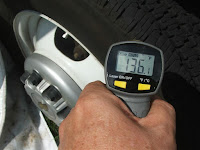 
KEY POINT
There are three things that can "kill" your tires. Ozone, UV and High Temperature. The Ozone & UV directly attack the surface of the tire making it crack when flexed. Temperature works no only on the surface but deep down inside the tire structure.
Increased temperature causes continued and accelerated chemical reaction which "ages" a tire faster than when the tire is cool. A rule of thumb would be that the rate a tire ages doubles with every 18°F increase in temperature. We can see the result of old rubber on the surface. What we don't see is the more brittle rubber of the internal tire structure. As rubber gets more brittle with age it also looses strength.

NOTE Overload and Underinflation can overheat a portion of a tire to the point the rubber and reinforcement materials loose all their strength.

Based on my simple test it would appear that by covering my tires I am significantly reducing the artificial aging for all the daylight hours my RV is parked and the sun is out. If I didn't have covers my tires would be "aging" FOUR times faster than with the covers in place.

I don't have black tire covers so can only guess at their temperature. While they may provide protection from UV I would be surprised if they can offer much temperature protection.

So I will let you answer the question of Tire Covers being a good investment or not.
Posted by Tireman9 at 2:46 PM 20 comments:

I have seen a number of posts on various forums of complaints about what is believed to be a failure of a “defective” tire. What I have not seen is any mention of anyone having bothered to provide details and information on what the defect is and a statement that they send the data to the US Dept Of Transportation. I have to wonder why people think there might be some government action when there is no information going to the government complaining about what they feel is a defective tire.

You can review the current tire recall list from the National Highway Traffic Safety Administration HERE.

NHTSA is the part of DOT that is responsible for collecting complaint information and doing the appropriate investigation. If there is data developed that would support some action such as a recall, NHTSA is the agency that can order the action. Before a tire might be recalled there is list of “complaints” accumulated and you can review that information HERE.

It is important to remember that just because someone may have had a tire failure and complained, that does not automatically mean there will be a recall. Many times there are contributing reasons for an individual tire to fail. Most of these contributing reasons are not part of a design or manufacturing trend which would affect a group of tires.

I can recount how my work as a Quality Investigation Engineer resulted in a recall of 4,900 tires when I discovered what was a manufacturing error. This sounds like a big number but in fact the data we assembled identified there were fewer than 150 tires total that had the problem. The reason the number grew is that tire recalls are done based on DOT serial, which as you know includes the week of production. So even though we were able to confirm the problem was caused by a single skid of material being used in the incorrect part of the tire, the entire weeks production had to be recalled. In this case none of the tires had made it to individual customers as the problem was discovered so quickly the tires were either in the warehouse or on vehicles still at dealer lots.

The reason I am telling you this is to show how the system works. A problem is discovered. An investigation is done. Sometimes by NHTSA based on the complaints received from the field and sometimes by the tire manufacturer with their in house quality department. If tires are to be recalled then the formal procedures and laws must be followed.


I have advised a number of people who complain about a tire failure that if they do not file a complaint there is no way there will be a recall or even an investigation. I do note there is a general tendency for many on some RV forums to brand all tire failures as being caused by “defective” tires but based on the pictures I have seen, I remember only one example of the failure that might have been caused by a design or manufacturing problem but since these failures were isolated to a single RV it is more likely the failures were service related.

Can I categorically state that there are currently no defective tires in the field? No I cannot.

However based on my experience of personally inspecting thousands of tires identified as "defective" by self proclaimed experts, the facts are that most tires fail because they are under inflated, overloaded, improperly repaired or suffered a road hazard, impact or even vandalism.

On a personal note I have to wonder why so many in the RV field are quick to blame a tire failure on the country of origin, tire manufacturer or complain when tires need replacing after many years of service and some abuse, while at the same time are willing to spend many tens or hundreds of thousands of dollars on an RV that has such poor quality that no one is willing to stand behind or provide a 100% bumper to bumper warranty of the product design or manufacturing for more than a few months.

I have offered and continue to offer to do a detailed inspection of failed tires and to issue an un-bias report of my findings but too often the most I get is a slightly out of focus and improperly lit photo of the subject tire with no DOT serial and documented loading and service speeds.

I will be offering, in future posts to my blog, examples and information on impacts and road hazards with photographs showing sidewall "bubbles" as well as proof of the tire being damaged in service.

If you have questions about a suspect tire “defect” I will be happy to talk with you if you attend my Tire Basics for the RV Owner at FMCA Family Reunion in Madison, WI the end of August or the Gypsy Journal Rally in Celina, OH the end of Sept.
Posted by Tireman9 at 6:57 AM 3 comments: