Do you have or need a spare?

Reasonable question. I have previously published some information on having a spare HERE, but for those that want a quick answer....

Most Motorhomes already have receiver for hitch so adding a spare carrier there should be relatively easy. Amazon has some and I have seen smaller models starting at $40.
One way to cut cost is to put one of your old tires under a cover as a spare.
Used wheel from junk yard should also cut the cost.
Re: Tire cover. I would consider a WHITE cover a necessity unless you want to bake the life out of the spare mounted outside the RV.
RE jack & tools. Be sure you know what you are doing and have all the tools you might need including flat board & steel plate if you need to jack on soft ground. If you don't already have the tools I suggest Harbor Freight, as hopefully you will never need the tools and if you do they will not get much use.
Will you be able to physically lift the tire and mount it on the RV? You will need correct 6 point socket and a 2' breaker bar and if you have a Motorhome with dual tires in the rear an extension. You should practice at home so you know how much effort is needed.
Here is a YouTube one guy made. Your system may be different so after watching, you can go and do a practice on your RV.
Even if you can't do the physical job having a spare will probably pay for itself as any road service should be able to change the mounted tire so you are not confronted with having to buy a mismatched new tire @ 2x the normal sale price.
Posted by Tireman9 at 11:26 AM No comments:

Email ThisBlogThis!Share to TwitterShare to FacebookShare to Pinterest
Labels: Spare

Tire covers. Can Black be OK?

It might help to first review the original post that included actual DATA on the subject of tire covers, and remember that old rubber is more likely to crack and fail than "younger" softer rubber, so keeping your tires as "young" as possible is a good thing to do.

So if you have a Class-A with no covers as seen here... 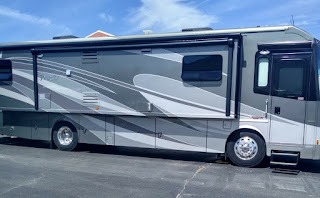 Is the only option to run white vinyl covers, as seen here?... 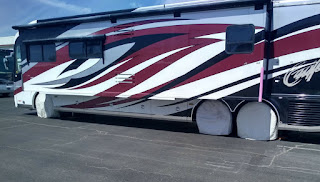 or could you run the "screens" as seen here?... 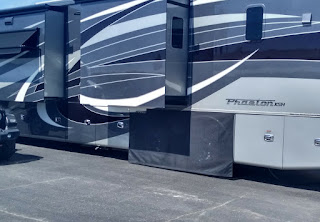 Well I have collected some temperature measurements and I will admit that initially I was surprised to learn that the tires behind the black mesh were about the same temperature as those under the white vinyl. after thinking about the situation, it occurred to me that it was possible for the mesh to shield the tire from direct sunlight as the angle of sunlight does not always line up with the openings in the mesh, while at the same time allowing air-flow.

So if you have a Class-A with the normal flat sides you do have an option.

The "Tire Shades" made by ShadePro and maybe other suppliers can protect your tires from the Sun's heat.

I know of no "spray" or tire "treatment" that can keep a tire as cool as putting the tire in the shade.

How to adjust tire pressure when inflating in a heated garage

I found a chart that covers how to adjust tire inflation when you are inflating tires inside a heated garage (heated to 65F) when the truck or RV will be moved to a very cold location. I am hoping that when you study the adjustment you will better understand what, if any adjustment is to be made with your vehicle. 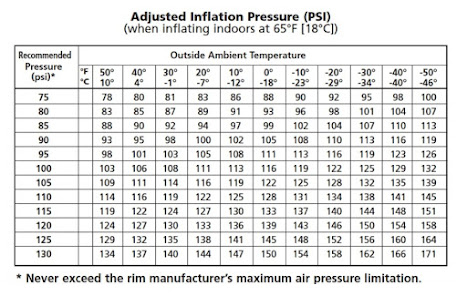 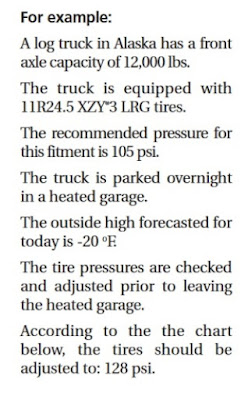 This as a long post but I wanted to share the type of questions i sometimes get.

" Good Morning' Roger. First, thank you for helping to dispel the misinformation about the care & feeding of consumer tires.