A review of some of the various RV forums will reveal that a fair portion of people have had some form of problems with valves and valve extensions. One poster provided a nice option that worked for him.

Jake L. from South Carolina had problems with getting his pressure gauge and inflation chuck onto his valve stem through the openings in his rim & hubcap.

Jake had some 135 degree stems installed but the company doing the work apparently did not do the work correctly and his new stems leaked. He now has regular straight stems that don't leak but he can't get the double foot chuck to work. 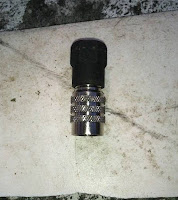 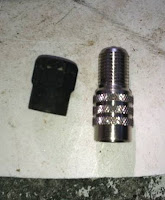 His solution was to use short extensions some call "Alligator". Here is a picture of the short extender.

Note the nice metal valve cap. Some people incorrectly believe that the "Alligator" cap is an acceptable alternative to a regular cap as it allows you inflate or check the air pressure through a small "trap door". The problem with using the cap in this manner is that it will allow dirt and grit to enter the valve stem chamber.

I covered the topic of dirt in the valve core 11/2/12. Check it out if you haven't already read it..


Here you can see that this short extension solved Jake's problems. 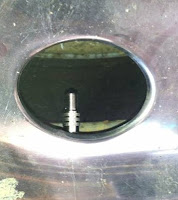 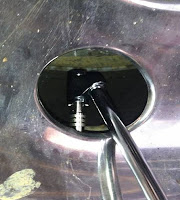 Regarding the issue of keeping dirt and grit out of the valve core chamber, I think this is something very few ever think about. 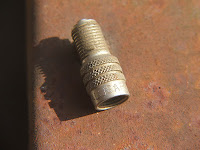 My short extension even carries the brand name "Alligator. 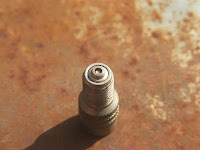 This is what the end of the Alligator extension looks like. 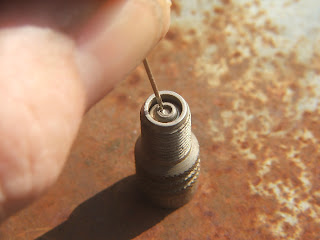 Here you can see how the extension works.


This part should not be considered a cap but just a very short valve extension.

It would be very easy for the end of the Alligator cap/extension to collect dirt which would be blown into the valve core area so if you use an "alligator" short extension be sure to use a cap or screw on TPM sensor
Posted by Tireman9 at 10:06 AM

Email ThisBlogThis!Share to TwitterShare to FacebookShare to Pinterest
Labels: Valve