Can you "Limp" home on a failed dual?

I have read a few posts on RV forum sites when the topic of what to do when a tire fails and you don't have a spare. 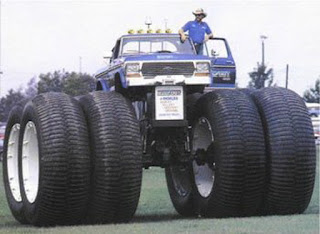 Many times it has been suggested that the person plans on "limping" home or to the tire service center with just one tire in the dual position of their RV.

While on the surface this might seem to be a reasonable approach, there are a few things that need to be considered.

First, unless you have a TPMS that warned you that one of your duals was loosing air, in all probability you have no idea how long you drove with one dual under inflated. If you don't know when the tire started to loose you also have no idea at what speed you drove on one under inflated tire and also on one overloaded tire.

If you have driven on a "flat" tire it is considered to have been damaged and should not be considered for future safe usage.

What is not obvious when you read the above is that is one tire of a dual goes flat the mate has now been overloaded. I covered some of the info in a post on the Special Considerations for Duals, but there is more that needs to be considered.

If you have one tire punctured and loosing air the mate is "taking up" the load for both tires until it is 100% overloaded. Driving at highway speed will do serious internal structural damage. Most of which cannot be seen with out special equipment like X-Ray so it is simply considered scrap so now you need to replace two tires.

Trying to "limp" means that you need to reduce your speed and according to the special tables in Tire & Rim Association for adjustments for speed, inflation and load your limp speed is not 30mph or 20 mph or even 10 mph but it is limited to 2 mph. That is TWO miles per hour Maximum. Any more and you are damaging your tire beyond repair.

The solution would be to call for service. I would only drive on a single tire for a hundred yards at most to get to a location where I could safely pull off the roadway.

If you feel your situation means you must drive on a single tire of a dual position then you need to accept that you will need to replace both the tire that suffered the failure and the tire that was 100% overloaded.  I would also remove the flat tire as you don't want it flapping around as it will do damage to your RV.
Posted by Tireman9 at 9:02 AM