A Tire Autopsy "Root Cause" Part 1

Many  people make statements about a tire "blowing out" or being defective but few post any facts about the real condition of the tire other than it came apart. There is a major difference between simply reporting a condition and providing information on the "Root Cause".
Examples of Conditions would be "the tread came off' or "tire lost air" or "tire went BOOM".
Examples of Root Cause might be "tire had a puncture" or "tire had an impact break" or "tire was run low and the sidewall had a flex failure". If you don't know the "WHY" of a tire failure then whatever actions were taken after the failure may or may not help to prevent a re-occurrence.

To help you understand this concept I want to take you through some real life examples. In many of these examples it was initially claimed that the subject tire was simply "defective" however as we review these examples I think you will ultimately agree that most tire failures occur because of some outside cause.

Here are three examples of damage done through the use of a high pressure power washer. 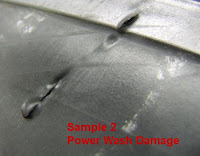 In each case someone claimed there was a defect built into the tire that caused a blister to form as seen in the pictures. 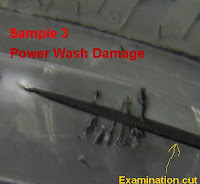 I know and proved that the damage was in fact caused by the use of a power washer as I did a quick cut tire examination (autopsy) to examine the layers of the sidewall. No internal contamination was observed.

A theory was formed and an experiment done to confirm or refute the theory. A tire that was sound was selected and using a pressure washer similar to what any of us could buy at a big box hardware store, we were was able to duplicate this damage.


Sidewall Impact Breaks occur under a combination of variables that have a very complex interaction. These include speed, load, inflation, shape and size of the item impacting the tire, angle of impact and even the condition of the shock absorbers. Change one or more of these and you may avoid the damage. 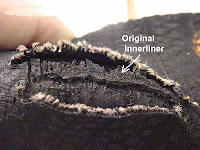 What usually happens is the pot hole or road debris is hit but if the tire doesn't immediately fail the incident is forgotten. Miles later the now damaged and weakened sidewall ruptures with no advance warning. Even if you have a TPMS you will probably get only a few seconds advance warning as the now hot rubber will rupture very quickly and the tire will many times shred which destroys the evidence.

Sometimes the sidewall bulge is observed before the sidewall ruptures. The inspection of tires with this body ply damage allows us to identify the sequense of events. In fact if you attend one of my tire seminars I relate the story of my then fiance and her experience of traveling over 17 miles after the impact before the tire ruptured.

Next time I will cover Belt Detachments 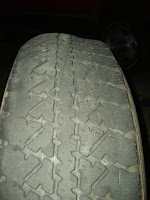 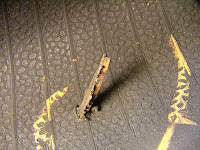 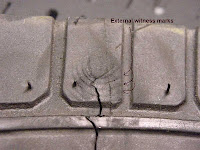