Can you do a tire "Autopsy" at home?

When you have a tire failure many people are only interested in replacing the tire as soon as possible. But there are others that want to understand the "why?" of the failure so they can take the steps necessary to avoid a re-occurrence of the problem for if you don't know the real basic reason for the failure any corrective action you might take may not actually "fix" the problem.

Think of a car not starting. If you jump to the conclusion that the reason for the non-start, is a bad battery when it really is the first signs of a failure of the starter motor or a failure of the ignition switch, the new battery will not "fix" the no start problem will it?

Now I am not saying that everyone needs to have the tools and skill to do the "autopsy" shown below but when I was working as a Forensic Tire Engineer I was expected to dig deep and to learn the real reason for a tire to fail.

It is in my basic nature to be inquisitive, so when I was contacted by an RV owner who had what he thought was a tire about to fail I decided that I could help him learn and understand the "why" when he started asking questions as many engineers do.

The following is what we did and what we learned.

As you can see the tread is very round. 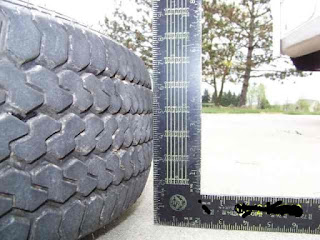 This is not normal for a steel belted radial tire.

John, the owner measured the OC of all 4 tires and found a big difference with one tire being an inch larger than the others. 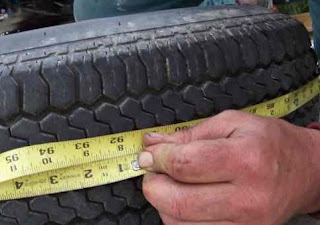 Clearly something was different this tire.

After removing the tire from the rv and looking closely at the tire he noticed that one portion of the tread seemed to "bulge" outward.

His next step was to confirm the tire was no longer round.

After de-mounting the tire and inspecting the interior he said he could not find any indication of failure. At that point John contacted me and after some back and forth I told him how to dissect the tire so he could ship the tread portion to me for a more detailed inspection.

You can see the work he had to do to get the tire tread area cut from the rest of the tire. 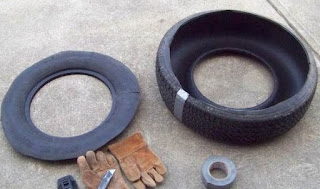 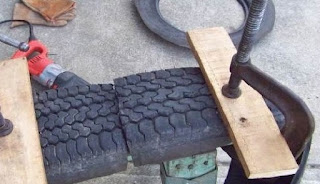 This was John's effort to

but he was not sucessful.

When I received the tread my experienced eye quickly found the location of the belt separation and you can see it here.

You can easily see the location on both sides of the tire tread where the two belts are no longer attached to each other.

This level of effort on John's part was extraordinary but we got the evidence to prove a belt separation as the reason for the bulge in the tread area.

Now you don't need to go to all this effort as a simple "Free Spin" inspection as seen in this YouTube video will provide the evidence you would need to decide if it is time to replace your tires.

I have recommended that owners of RV trailers do a "Free Spin" inspection once a year or every 2,000 miles. This schedule might line up with when you inspect brakes or re-pack the wheel bearings so the Free Spin is not any additional effort and if you discover a wobble or bulge in your tire you know that it's probably time to replace it rather than wait for it to come apart on the side of the Interstate. 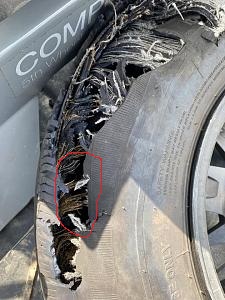