You just had a tire failure. Did you take apropriate action to prevent a re-occurance?

If someone has a problem with a tire it would help us all if some effort was made to learn the real root cause. If the root cause is a manufacturing problem then it should be reported to NHTSA and if enough complaints are received there is the possibility of a recall. The threat and costs associated with recalls can be enough incentive for a MFG to change and improve the durability of their tires. It is also possible that external conditions such as  road impacts caused the failure. Another possibility is a combination of overload and under-inflation. Tires like any other product do have a limit in their ability to tolerate loads greater than their design limit. One thing about tires, unlike items made of metal such as a length of chain, is that tires can tolerate overload for a short time but eventually they will fail and the structural damage is cumulative. Metal items like a piece of chain also have a rated load and as long as you never exceed that load the chain retains it's strength.
If you have a failure it is sometimes possible to do an inspection and to learn the reason for the failure. However a detailed inspection requires a close inspection by a trained and knowledgeable specialist. If you had a tire fail and it looked like this tire, 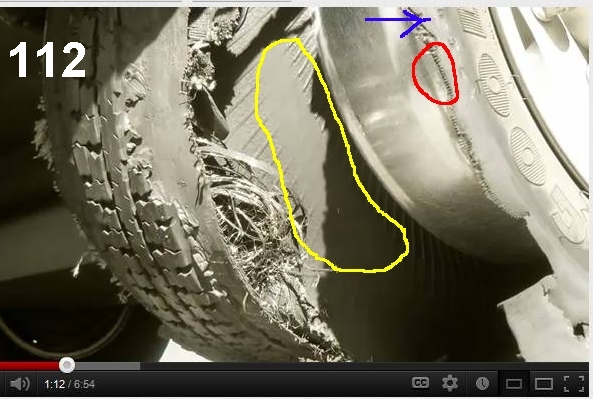 do you think you could identify the evidence of the reason for the failure? The multiple pictures of this tire (well lit and in focus) provided the physical evidence to allow the root cause of the failure to be identified with a high level of probability as the act of checking tire inflation about 50 miles earlier in the day. This is an example of why it is important to get a number of pictures of the failed tire and to have the tire inspected by a knowledgeable Tire Adjustment Engineer. Each of the major tire companies have a team of experienced tire engineers available to inspect tires that have been presented to a tire dealership run by the tire manufacturer, for an "adjustment" and a request for compensation for the failure.
If you have ever had a tire failure did you just dispose of it as soon as possible and just claim it failed because of the zip code where the tire was made, or did you make a real effort to learn the real cause of the failure so you could take appropriate action to improve your chances of avoiding a repeat?
Just so you know I have identified three different and distinct locations of different evidence of the cause and reasons for this tire failure. All of these have been identified in one or more of my blog posts. Here is one, if you are interested.
##RVT1061
Posted by Tireman9 at 8:19 PM

Email ThisBlogThis!Share to TwitterShare to FacebookShare to Pinterest
Labels: Why tires Fail