Are IR guns good for detecting low inflation in tires?

"I carry a heat gun with me. When I stop I check all tires. If one is a lot hotter than the rest I have a problem."

"A cheap harbor freight gun is a good investment. We carry two when I tow my boat to the keys. Each stop my buddy and I have a gun in each door. We each shoot all four wheels then compare noted about what we got as far as readings."

As a tire engineer I can advise that IR guns are OK for checking the temperature of metal items such as wheels, hubs or brake drums that conduct heat but rubber is an insulator and very poor conductor of heat so no IR hand gun I know of can detect a meaningful temperature at a rest stop as it isn't the average temperature of a tire that can result in a failure but a spot, maybe smaller than a quarter that you have to worry about. What testing have you done to learn that exact spot over the entire surface of your tires?

The hottest location (most likely to fail or cause problems is also about 1/4" deep inside the structure). Heat is the result of running overloaded or under-inflated. Scale measurement is the only reliable way to know if you are overloaded. Pressure readings are the only reliable way for a consumer to know if they are running under-inflated. You can pick up a nail or cut or have a leaking valve and be underinflated within a few minutes and have a failure a few miles later. The tire I covered in my detailed post where I did a visual "Autopsy"reportedly had it's air pressure checked just 50 miles before the catastrophic "Blowout" run low flex failure. A leaking valve core from improper seating is one possible reason for the air loss the led to the failure. A TPMS is the only reliable way to know the actual running pressure unless you stop every 5 to 10 minutes and check with a gauge and confirm your valve core has properly sealed after you check the pressure. A TPMS can even sometimes warn of brake or bearing problems because the heat is transferred through the metal parts to the metal base of the TPM sensor.

I do think these low cost temperature sensors have other uses such as checking the temperature of your furnace output or confirming the electrical connections in your 'fuse box" are not getting  overheated. Even the heating element in you absorption refrigerator can be checked. I did use my IR gun to check the surface temperature of my tires when I did my test on tire covers but running tires have a wide range of temperatures as seen here with the output from a $10,000 IR camera. Note the wide range of operating temperatures (80F to 130F) in close proximity ( 0.10") when the passenger tire was run with 27 psi. 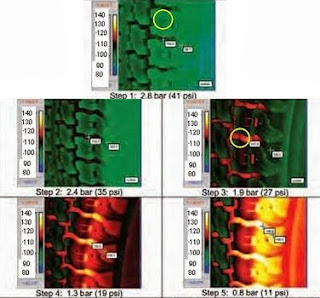 It only takes a few seconds for the surface temperature to drop significantly which would be less time than it takes you to come to a stop in a rest area so your readings would not reflect the important temperatures near the tire hot spot.