What effect does speed have on tire failure?

Question:
"What effect does speed have on tire failure?

I have an 8000 lb trailer with 4 Goodyear Marathons. The truck is a Dodge 2500 diesel so I can cruise at 75 mph subject to wind and hills.

How much if any does speed factor into tire failure? I replace tires every 4-6 years regardless of what the look like, and keep them inflated at the PSI marked on the tires." 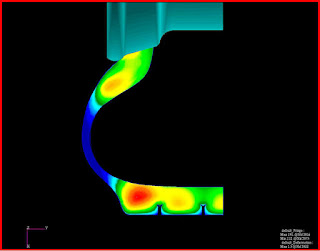 with Red being the hottest and dark blue being the coolest.
When you increase the temperature of rubber you are effectively increasing the rate the rubber is aging. I believe we all understand that old rubber is not as flexible as new rubber. If it isn't as flexible you end up with cracks or cracks that grow every time the rubber is flexed. More cracks and larger cracks are what result in tire failure.

For the above reasons plus others, the major tire companies suggest that in RV operation tires never be driven any faster than 75 and you can see this max speed stated in their literature for many of their RV tires.

But wait, you say your tires have a "Speed Symbol" that relates to 87 or 99 or maybe even 130. HERE is some information on speed ratings. Just because you have a tire with a fast symbol doesn't mean it can be driven at those speeds for 20 or 40,000 miles. About the only thing you can count on is that tires with a "higher" symbol will provide better steering response than a tire with a lower rating.

Now back to the question of how fast can you drive or tow your RV. I previously mentioned 75 as the upper limit but for some tires, there are other things to consider. With ST type tires as found on many trailers, we need to remember that the load capacity is based on a formula that originally specified a max speed of 65 mph. In the past, there were Technical Bulletins that advised that inflation needed to be increased (but not above the sidewall max) by 10 psi to go 70 mph. In addition, load needed to be decreased by 10% if you want to go 75. Still, there was that 75 max.

Many trailer owners know that they need to replace their tires before they wear out. If they don't they are probably going to have some type of failure. But those same people will not replace the tires on their pick-up till they are significantly worn. Why?
The answer can be seen if you simply compare the load and speed ratings of an LT tire and an identical size ST type tire.

So exactly what type of magical engineering has tire company X used to achieve both increased load capacity plus increased speed capacity when it is the air pressure that supports the load? If they have the ability to make that ST tire really perform at those speed and load conditions what is wrong with their LT type tires?

IMO what we are looking at is a marketing plan taking over the engineering reality.

Bottom line
You may be able to pull the trailer at speeds above 65 or drive the Class-A diesel pusher faster than 75 but you will be consuming the finite life of the tire and can expect a failure before you wear it out no matter how you maintain your tires.