Can Black tire "Covers" be used without causing damage?

Back in June 2011 I did a post that asked the question  "Tire Covers - Do they do any good?"  In that post I showed the numbers from a test I had run where I collected tire temperatures showing the effects of shielding my tires with white vinyl covers vs the tire temperature when exposed to direct sunlight for just a couple hours.

I also covered the science of the damage that excess heat can do to our tires. The bottom line of that post was that white vinyl can help extend the life of tires by protecting them from both the affects of UV and the IMO more serious damage done to the internal structure of tires from excess heat.

I also did a rough check using dark trash bag covering a tire and in that case I found that the black cover actually resulted in a tire being hotter than when it was just in the Sun with no cover. Based on that limited data I have recommended against the use of Black or dark color vinyl tire covers.

On more than one occasion I have observed some Class-A RVs with what appears to be a mesh shield than hangs down off the side of the RV. This is different than the vinyl "bag" that hangs directly over the outside of my tires. I was able to collect a few data points while in Redmond , OR in 2014 at a large RV Convention, and that data suggested it might be possible to use this mesh material and not increase the temperature of the tires. Finally this Summer while at another RV Convention I struck up a conversation with a representative of ShadePro Inc who offered to send me a Tire Shade to test. In Aug & Sept i had some health issues and then I ran into difficulty with clouds here in NE Ohio but I was finally able to collect the data I felt comfortable with that would allow me to reach a conclusion of if this black mesh material could be used. 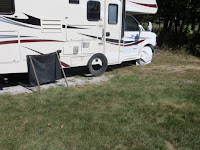 Here is a shot of my test set-up with a white vinyl on front, control sidewall in center and the black mesh shielding the rear. After 2 hours in the full sun
In the shade a tire gave 92°F 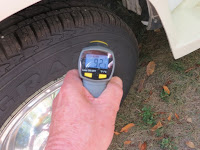 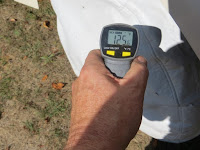 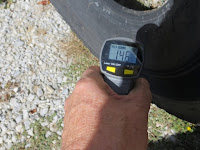 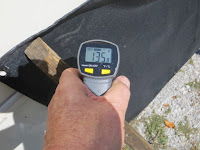 Under the cover the front tire was at 114° 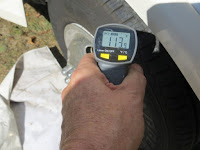 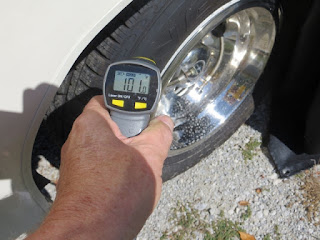 Conclusion:
The data shows that in this test the black mesh did a better job of keeping the tire cool than the white vinyl.

Observation:
I was wrong to suggest that all black shields were worse than white covers, as this test shows that data is better than opinion when it comes to facts. This is one of the wonderful things about Science.