Heat, High Speed and the "Magic" in ST tires.


Heat generation is primarily the result of a combination of High Speed, High Load, and Low Inflation. Factors that can counter some of the negative effects of heat on tires can include the use of more expensive rubber compounds, reduced thickness tread and other construction features that are out of our control as tire owners. Without access to secret formulas and other proprietary information, I know of no way to learn which of these features is in which tires if any. There is one exception, of the inclusion of full Nylon Cap Ply. This would be identified in the material list molded on the tire sidewall along with the number and material in both the sidewall and under the center of the tire tread.

However, the driver] has complete control over the Speed/Load/Inflation factors.

IMO it would be better if all tires had at least a 15% margin on load capacity, with 20 to 25% being better margin. We need to remember that road slant & crown and curves along with significant sideload from wind can easily result in overloading tires that were measured on a level scale. Multi-axle trailers should shoot for a 25% load margin. (read about Interply Shear to understand why )

Ever wonder why RV trailers seem to have a lot of tire problems but your daily driver (car or SUV) doesn't?
Let's look at Reserve Load Capacity of your car:
Many / most have 30% to 40% Reserve Capacity on the tires. 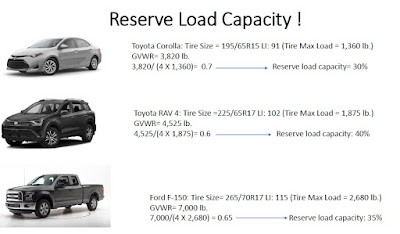 Now when we look at an RV trailer we see only 6% with many having 0% margin.


Previously I indicated that Inter Ply Shear can be the equivalent of adding 24% more load on the tire while in operation. Using the above tire the IPS effect is reduced considerably.

NOTE in 2017 RVIA and the National Fire Protection Association, guidelines for tire selection for RVs was updated to require a MINIMUM of a 10% margin in tire load capacity over the GAWR. Some RV companies achieved this margin by upgrading their tire load capacity while others simply lowered the GAWR number on the vehicle certification label. Do you know what your RV company did?

Speed rating. We should think of this like the engine red-line. Everyone seems to understand that running faster than red line will shorten engine life but that doesn't mean that 5,900 on a 6,000 redline is good to run for hours on end and may contribute to shorter engine life just as running 62 mph on tires rated, based on their original load calculations, for a max of 65 mph.
The high-speed test is a 30-minute step speed test of a brand new tire on a smooth test wheel. No potholes or curb damage. All that is needed to "pass" the test is to meet the target speed and not come apart. The tire is considered scrap after the test.  Would you consider your tires to be "scrap" after you run 70 or 80 mph for an hour or so?
Remember damage (internal cracks) done, even at the molecular level, in tires never repairs itself but only increases in size.

While this post is primarily about Trailer application the limit on high speed also applies to 16 through 22.5" tires that have a max rating of 75 in RV application which would be their "Red Line" but I hear many Class-A owners talking about running over 70 for miles on end but being surprised when they suffer a tire failure.

LT tires would be my first choice in any trailer application where heavy loading was required. I do not understand why so many think that there is some magic engineering used on ST tires that allow them to support 10% to 20% more load than an LT tire of identically dimensions. The load formulas used today for ST type are the same ones used in 1969 when they were limited to 65 MAX (red-line).

I would be very interested to hear an answer from the engineers at the companies that make ST type tires why they were able to suddenly, almost overnight, increase the speed rating from 65 to 75, 87 or even 99 on their ST type tires. Do they have some new materials? Why don't they put those same super materials in LT tires and increase the load capacity of LT tires to be the same as or near to the loads seen claimed for ST type tires?