Tire inflation not the same for all trailers

I have written a number of times on the topic of Interply Shear. This is the force that is tring to tear the belts of radial tires apart.
There are some highly technical papers on the topic and you can review tham after a simple Google search on the term. You can also look here on my blog for the posts where the term is tied to a post by simply checking the list of topics on the left side of my blog. Basically this force comes about when the belts in a radial tire are forced to change shape. This means either when a tire rolls and the footprint changes from curved to flat as the footprint rolls into contact with the ground. This force increases when external forces from cornering are also applied to tires.
So why do trailers seem to have such high Interply Shear forces? Well it's not all trailers as the cornering forces of single axle trailers are much lower than the forces of tandem or triple axle trailers.


What tipped me off to this was an observation at a campground that happened to have a freshly smother gravel driveway and a multi-axle trailer happened to make a 180° turn as I was walking by. I noticed that the gravel marks were not a smoth curve but there was a series of turns interupted by discontinuities. 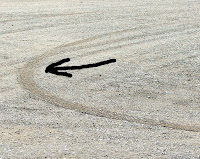 A short time later I saw a video from Keystone RV Company of wheel lug nut torque (you should watch the full video some time)
While watching their video I recall some special high side load tests we ran in our tire test lab.

Here is a short out-take from the longer Keystone video that shows what happens to multi-axle trailer tires.


In the video you can see how the two tires are fighting each other with one bending in as the other bends out. You can imagine that if the turn is made on gravel at some point the high sideload would result is a sudden breakaway or slip. That's what I observed on the gravel turn.

Back at work I had some high powered Finite Element computer programs run to simulate the side load of a multi axle trailer and the results showed that the side loads on a trailer could be 24% higher than on a standard vehicle even with identical radius and loads on the tires.

Further analysis showed that increasing the tire inflation could lower the extra shear, but sadly not eliminate it.

Bottom line
In a number of posts I have recommended that Motorhomes set their inflation based on measured static load plus a margin of at least 10% additional PSI. This would also apply to single axle trailers. BUT for Tandem and triple axle trailers I strongly recommend that the tire cold inflation be set to the inflation molded on the tire sidewall associated with the tire maximum load capacity. I also recommend that the measured static tire loads on these trailers be no greater than 85% of the tire maximum with a 20% margin being better.
Posted by Tireman9 at 7:52 PM