Another question on why Trailer tires fail more often than tires on motorized vehicles.

On a thread on an RV trailer forum Peter made this statement
"At highway speeds interply shear is not as much of an issue, as I understand things."
I posted this reply:
Speed itself is not the issue that causes Interply Shear in Radial tires. Two things happen to radials as they are driven.
One is the tread (and belts) must flatten out when the tire contacts the road. This results in the steel cords moving relative to each other. This is a shear force.
Second is that when the contact patch or "footprint" is forced to turn a corner there is some slipage between the direction of travel that aligns with the center of rotation and the actual direction of travel.

On motorized vehicles the front tires have a slip angle and the side forces are what actually results in the vehicle turning. But of you were to project the center of rotation toward the center of the driving radius you will find that those centers are close together This is due to the "Ackerman" designed into the front end alignment.
Yokohama has this nice graphic.

Multi axle trailers however have two axles and 4 tires, with no tire rotating around a centerline that points to the center of the turn radius.

Here is a rough sketch of what happens to trailer tires. 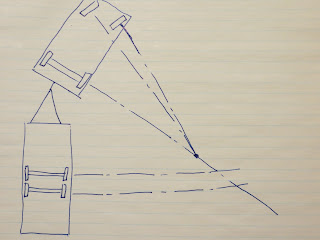 As you can see the center of the turn for the tires on the motor vehicle is the same fo all 4 tires while all 4 of the trailer tires are rotating around different centers. This is why the side loading as seen in the video is significantly higher than it is for tires in motorvehicle application.

These tires are forced to higher than normal "Slip Angle" through any turn, Not just the extreme tight turns when backing into a parking space.
Damage to tire structure is cumulative and while a small turn imparts less shear than t tight ture even small forces can do damage on a molecular level.
Here are some links to various articles on Interply Shear.

Duals on a large truck slip on the pavement when forced through tight turns and with inflations over 100 psi they do not deforn as much as trailer tires with lower levels of inflation.

Increased inflation will lower the interply shear. It will never lower it to the level seen on a motorized vehicle Only Passive Steer axles on trailers similar to wat is seen on the back end of cement trucks can lower the shear too but I don't see any RV trailer company offering that expensive alternative. Afterall they know you can't make a warranty claim on failed tires on the RV company as belt failures from Interply Shear is a long term proposition.
Posted by Tireman9 at 1:06 PM