Leveling Blocks - Only support one dual?

I received this question the other day.

"I have some questions about leveling with ramps, specifically on vehicles with rear dualies.

The obvious temptation is to use only one ramp -- and the obvious response is that this is a 2x overload condition and should be avoided.

HOWEVER -- since tires and wheels are clearly designed with safety factors, and since the overload is a very static situation with none of the dynamic variations of a moving scenario, what do you think are the real risks involved?

In weight-sensitive designs like aircraft, I know that a typical safety factor is 2.5x. But I don't know what's in tires and wheels.

It's easy to say "just carry four ramps" to level the rear of a dually coach, but for the smaller rigs, that kind of bulk is pretty impractical.

I'm curious, but I'm cautious too. I'd appreciate your thoughts.

First "Safety Factor".
I understand the concept for aircraft and for some other items but the concept doesn't translate to tires very well. Unlike the metal used in aircraft, there is a lot more variation in the raw materials and the finished products
Tires are designed and manufactured to meet and exceed a set of requirements. The requirements are such that all tires must be capable of meeting or exceeding the standards but there is no advantage to exceeding them beyond their design goals as you can't make a claim that some tires in a line might deliver x thousand miles if all tires in the line can't and with hundreds of thousands of tires in a production run it is essentially impossible.
In your aircraft example, there are thousands of subsystems that can each be replaced or upgraded individually and while there may be a goal of a 2.5 safety factor I doubt that each and every part manages to wear out at the same point in its life.

Tires don't have replaceable parts, so while some parts may last a long time and even longer than advertised, when any one component simply meets its design goal but doesn't exceed it, the tire's life is over.


Now to your question on ramps. The answer for ramps is the same as for basic supports used to keep tires out of water when parked for the winter months.

The #1 priority is to support the entire footprint (contact area) uniformly. Never just half the tread width or half the tread length. Even only supporting 80 or 90% of the contact area is not good for the tire structure. Technically the 200% load is not a serious issue but it will definitely stretch a sidewall greater than normal. This increased stretch could, in the long term, lead to localized sidewall cracking after long-term use. RV application can also add other issues such as the tire sidewall losing some of it's "stretch" properties. RV tires are not designed to ever be loaded more than 100% of the load stated on the tire sidewall and inflated to the level associated with that stated max load.

THIS post has some pictures of what you should NOT do. It also shows an example of a tire "footprint" after parked on grass for a couple days.  A 2x4 under part the tread is particularly bad. When you use a block or ramp that is not as wide or long as the tire contact patch the edge that is not fully supported will have localized bending that can overstress that part of a tire.

Yes, tires are built to tolerate abuse and overload and overspeed and under-inflation but in each case, there will be some damage done to the structure. The damage is cumulative and tires do not repair themselves.

I carry 3 leveling blocks in my small Class-C. Here are two set up for my dual tires.  I can use just one if I need to raise a front tire. These ramps can raise the tire(s) 1-1/2" or 3". If I need more I will move the RV to a more level location. 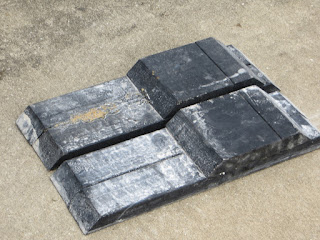 If I need to raise one side of the rear I always use two under the duals.  If that isn't enough, I move the RV to a different spot.

Your tires are not likely to fail simply because you only supported one of the duals overnight but I can say that putting 200% load on a tire is not a good idea if you can avoid it.

Bottom Line
Anything you use to support a tire must be at least as wide and as long as the tire contact area or "footprint". If your "blocks" aren't wider than the tire or if you do not drive upon them such that they are centered you are doing some damage that could contribute to premature failure that you probably would never associate with the use of improper sized leveling blocks.