I recently read some comments about early (1970's)  wheels flexing enough to eject wheel covers (full hub caps) when radial tires were first used to replace the original bias tires. This is an example of why it is important to know if your steel wheels are rated (designed) for radial tire use if you have an older RV that came originally with bias tires and are considering changing to radials.

I think this is more likely to be an issue on old "classic" trailers but it is possible that there are some older (60's vintage and earlier) motorhomes that might have originally come with bias tires also, so this info applies.

Excess flexing can result in steel fatigue which can result in wheel failure. A quick search of the internet found a number of examples: 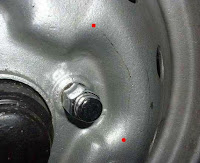 Note the crack between the two red dots. This is early sign of fatigue crack of the wheel disk.


If the wheel is not replaced this type of crack can grow till the wheel comes apart like this:

Here is a trailer wheel with a complete failure of one spoke: 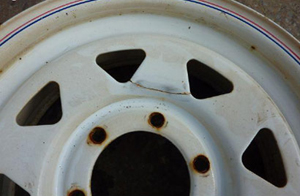 Fatigue can also occur in the flange area of the rim as seen in this example: 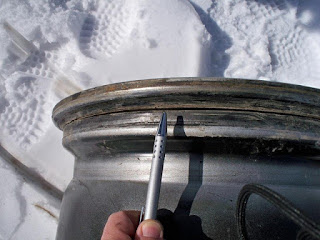 As far as I know most cast aluminum wheels made since the 80's are probably OK for use with radial tires but with the extra side loading seen with multi-axle trailers failure of aluminum wheels is possible too. 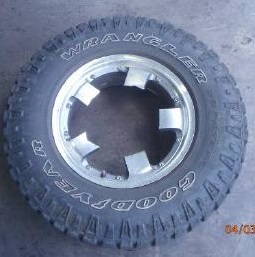 I found an excellent video that shows the results of these forces at Keystone RV. Watch the section from time 0:46 to 1:07 and note that the tires on one axle bend inboard while the others are forced outward. This puts tremendous strain on both the tire and the wheel and may lead to failure of either or both parts.
This type of failure may occur after the third or fourth set of tires.

A side note on wheel failure. I have experienced wheel failure on my race car after about 3,000 miles usage but these were light weight multi 3 piece wheels with cast center and spun flanges that bolted together. Application on a relatively heavy car (Camaro) resulted in fatigue failure. Luckily we were doing magnaflux dye penetrant inspection and discovered the cracks when doing off-season re-build and not during a race.

Subscribe to the weekly RVtravel.com newsletter or one of our other newsletters about RVing. Great information and advice. Now in our 15th year. Learn more or subscribe.