Recently read a post on a forum where the question was asked about by-passing the speed limiter that was on the poster's Class-A unit as the poster wanted to drive faster than 80! 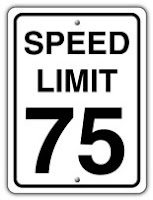 The general consensus was that this was not a reasonable speed in an RV and almost universally people knew that their tires were rated for 75mph or less.

On my trip from Ohio to Oregon last summer I noted that many interstates now had updated the posted speed limits from the old 55 to 65, 70 and as high as 80mph. While I "puttered" along in the right lane with my cruise set at 60-62 mph, I saw all manner of vehicles whiz past me, including many RVs, some of which were clearly exceeding the speed rating of their tires.

In March and April I wrote about tire speed ratings, but this is a real safety issue with potentially both short- and long-term consequences.

First off, as a professional race car driver and police driving instructor, I think it would be unsafe and foolish to drive an RV in excess of 70 mph. A quick search of the internet finds numerous charts showing the effect of increased speed on stopping distance, with large RVs needing 40% to maybe 80% more distance to come to a stop as speed increases.

At 55 mph, you will "only" need 100 feet more than the length of a football field to stop; at 80 mph, it would take you the length of three football fields to come to a stop. While you might get lucky as you sit high above the traffic, have you asked yourself how you would feel after driving completely over a passenger car that can stop in maybe half the distance it takes you to stop?

BUT this blog isn't about general driving safety, as hopefully you have a good understanding of your vehicle capabilities, having done a practice emergency stop on a "closed course." I want to address the effect of speed on tire durability.

Tires have a speed rating. This is the speed at which a tire can be driven for a short time without failing immediately. For most ST type tires this is 65 mph. There are some special high load trailer tires that are only rated for 62 mph.  LT tires and TBR (Truck-Bus Radials) are rated for 75 mph in RV service. If you look at the side of passenger car tires you will see a "Speed Symbol" letter.
An example might be LT235/85R16 114/111 Q   with the 114/111 being the "Load Index" single and dual and the Letter "Q" being the speed symbol.

Many LT tires also have such a symbol but if you place a passenger tire or LT tire in RV service the manufacturer has lowered the speed rating to 75 max. If there is no Speed Symbol then the speed rating for LT tires should be considered to be 65 mph.

As I wrote previously, some ST tires may be rated with a speed number or symbol by the manufacturer. This number should be molded on the sidewall. I would not trust information that is just verbal from a tire salesman.

IMPORTANT INFORMATION
It is very important that you understand that all the above is based on a laboratory test done on new tires. If a tire has hit a pot hole or been repaired or been parked in the sun for months, then there has been some degradation to the tire's strength and I would not expect it to pass the same test requirements. In fact, if a tire has been repaired, it's in many pieces of literature that the tire looses its speed rating.

Another bit of information to remember is that running fast will increase the temperature of a tire and as I covered in depth in my post on tire covers: "Increased temperature causes continued and accelerated chemical reaction which "ages" a tire faster than when the tire is cool. A rule of thumb would be that the rate a tire ages doubles with every 18°F increase in temperature. We can see the result of old rubber on the surface. What we don't see is the more brittle rubber of the internal tire structure. As rubber gets more brittle with age it also looses strength." Running a tire at 70 rather than 60 will probably increase the internal temperature by about 18°F so every hour you are driving that fast is costing you two hours of tire life. Damage is cumulative and slowing down does not repair the damage you have already done.

Drive safe.  Slow down and enjoy the journey.