Will you increase load capacity with higher Load Range?

The question of load capacity and Load Range gets asked a lot, so it seems to be a bit of a stumbling block for a number of RV owners. Here is an example:
"I need to replace the ST235/75R15 tires on my trailer. Currently have load range C tires which is sufficient for the maximum trailer weight when inflated to 50psi but allows almost no safety margin. I want to change to either load range D or E tires. My rims are only rated for 65 psi so if I went to the load range E tires I would only be able to inflate them to 65 psi. My question is this. Is there any advantage to a load range E tire used at 65 psi vs a load range D tire at 65 psi?" 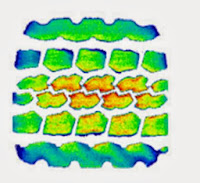 As some of you remember, I previously covered the fact that it is the air not the tire that carries the load. For those that still have doubts, here is a picture from a special test machine that measures force and delivers the answer in color. In this case, the lowest force is Blue which increases to Green, then Yellow and finally Red at the highest force. It is clear that the tire wants to be round because of the high inflation pressure but when you press the tire against a surface it becomes flat with  the highest force in the center of the tire. If it was the sidewall that carried the load, as some want to believe, then the Red (high force) should be at the outside shoulders.

Now when you go up in Load Range you are actually looking at the capability of the tire to carry more inflation pressure. Remember to gain in load capacity you need to increase the inflation. Years ago when tires used cotton for body cord we might have 4, 6, 8 or more layers or ply of reinforcement to retain the increased air pressure. Those increments provided steps in the Load/Inflation tables. Since the late 60's and early 70's when materials improved the actual number of ply decreased and the term Load Range was applied to those steps.

So going back to the original question, when increasing the Load Range you gain the possibility of increased load carrying ability but if you don't increase the actual cold inflation, the change in Load Range will not give you any increase in load carrying capacity.

BOTTOM LINE
The answer to the question is;
He will gain a safety margin if he increases his inflation to 65psi with LR-D but if he stays at 65psi there is nothing further gained by going to LR-E as there is no difference in the capacity at 65psi.
The same thing would apply to the 22.5 example. When we look at the Goodyear tables we see that at 110psi both the LR-G and the LR-H are rated for 6,175# single or in dual application at 100psi they both are rated as 5,675#.

Special note: It is important that you look at the table on the web site of the manufacturer of your tires as not all companies give the exact same capacity number at every inflation level, even for the same size.