Lets think about our favorite topic for a few moments.

Some people believe that tire blowouts happen for no apparent reason. Others are convinced that even with TPMS you will not get any warning before there is a catastrophic failure. Well while watching a re-run of the TV show Mythbusters the other day, I saw a perfect example of just how difficult it is to simply make a properly loaded & inflated tire blow out.

For those that haven't seen the show, you should know that the "hosts" are two special effects experts who really enjoy blowing things up or creating some other dramatic footage for TV or movies. In this particular episode, which originally aired June 6 , 2007, they set out to make a truck tire explode and hit a dummy to confirm or bust the myth that exploding truck tires can kill.

Just one minor problem... They could not make the tire blow out. They designed a rig that would allow them to run a lightly loaded truck tire at highway speed. First they shot the spinning tire with a .12 gauge shotgun using a large deer slug. They hit the sidewall of the spinning tire as intended but they got a "pissss" of leaking air but no explosion.

Next they cut most of the sidewall into the steel body ply then using an industrial torpedo heater they raised the temperature of the tire. They also lowered the pressure to only 30 psi. Still no sudden failure. After watching the test I noted that they were supporting the truck tire with a heavy fork lift so the sidewall was not deflecting as would happen in a real world condition of only 30 psi while fully loaded. 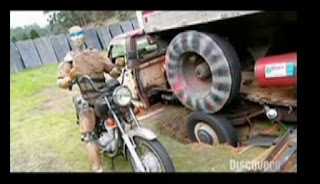 You can see the large red heater in this shot. The dummy was their test subject that they originally wanted to hit when the tire blew out. Note the lack of sidewall deflection. This was why the Mythbusters failed to achieve their goal of having the tire explode.


This set of conditions also was not enough, so after bursting the sidewall by over pressurizing the tire they again spun it up and finally were able to make the tire, that was already severely damaged, come apart.

Here you can see the results of all their efforts. 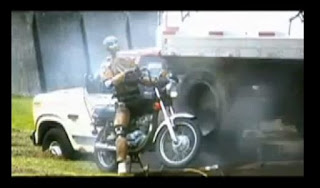 but you can still see that the truck was suspended so the tire was not flexing as it would in real life.

Bottom Line  Even when intenionally damaged this video shows how difficult it is to fail or blowout a tire if you do not have the sidewall fold and flex as it would when run extremely under-inflated. To me this supports my position that tires simply do not "blowout" when properly loaded and inflated. If you have a TPMS you would be warned of punctures or small cuts that allow air to leak out over a period of a couple of minutes. This warning should be enough to allow you to safely pull off the road before there is damage to the RV or there is a loss of vehicle control.

The full episode is available through Netflix or Amazon. The Youtube version I found however does not show the details of their failure to make the tire fail on command.
Posted by Tireman9 at 10:33 AM