Tire Failure because "Made in xxxxx"

In my training class for tire engineers and technicians, a concept I feel is important is discovering the "Root Cause" or real reason for the failure. There is difference between reporting or simply stating the condition of a tire such as "a Blowout" and the reason for the condition. If you don't understand the underlying reason for the tire's condition or what initiated the series of events that led to the failure, then the corrective action you take, may not prevent another failure. 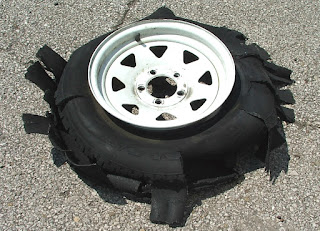 If we are confronted with a tire that looks like this
many would simply say "we had a blowout". If they then read the information on the tire sidewall that says "Made in xxxxx"  or if they read the DOT serial and used the information on THIS website to learn where the manufacturing plant was located they might simply claim the tire failed because it was made in country xyz. They then simply jump to the conclusion that the way to prevent having a similar failure in the future would be to only buy tires not made in the same country the failed tire was from. They might feel better but in all probability they will not have taken the appropriate action to lessen the chance of having another failure as the country of origin in itself, is no more likely to have "caused" the failure than would the fact that the tire plant was painted blue rather than green.

Lets step back and look for physical evidence for the real reason or "Root Cause" for the failure. A simple trick is to ask WHY? at least 5 times. Here is how it works in the case of this failure.
1. Why did the tire fail? Answers might be the sidewall shredded or the tread and belts came off or there is a large bulge in the sidewall or because there is a nail or other puncturing object in it etc. Each of these answers would generate a different 2nd question
2. Why did the sidewall shred? Answers might be: Possibly hit a pot hole or tire was driven on after it lost air.
3. Why can you know if you drove on it after it lost air? Answer It would have melted body cord or fatigued steel body cord
4. Why did you drive on the tire after it lost air?  Answer might be: I didn't know it was leaking
5. Why did the tire leak? or Why didn't you know the tire had lost air?  Answer might be: The valve failed or I had no Tire Pressure Monitor System.
Now you have enough information to take the appropriate action as simply changing brands of tires will not stop the valve from leaking or give you warning of an air loss due to puncture in the future.

Now to help you out with understanding what evidence can help you ask the correct questions I will offer a few examples of various conditions. 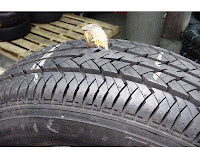 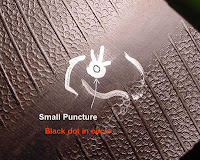 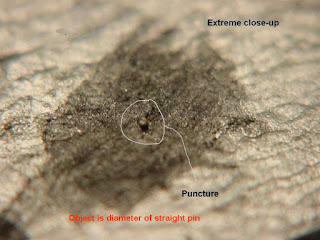 Steel fails (think paper clip) when bent back and forth more than it was designed to for many cycles. You can see this "necking" with a low level magnifying glass. 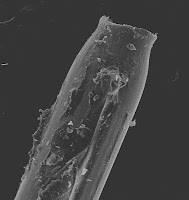 I hope this helps you understand that it is very difficult to stand back 10 feet and look at a tire and know why it really failed. I also hope that you have a better appreciation for the fact that if you don't investigate and learn the real reason for the failure simply changing the tire brand may not prevent another occurrence.

Bottom Line
If you have a failure you need to preserve as much of the evidence as possible so either you or the tire dealer you work with can do a more thorough "autopsy" to learn the real reason for the failure. If the tire is under warranty, the dealer or manufacturer will want to be able to examine the failed tire. It is unrealistic to expect compensation for a failed tire without you being able to provide the evidence of the failure. The major manufacturers have teams of engineers who's job it is is to inspect failed tires so appropriate action can be taken. This is why I suggest that you buy your tires from a large tire company with thousands of stores rather than buy the cheapest tire you can find at "Billy-Jo-Bob's Bate Shop & Cheap Tire Emporium" .