Impact damage or Defective tire? How can fishing line help explain which?

Many times the root cause of a "blowout" is impact damage. While there are many variable conditions such as speed, size of object being hit, tire inflation, spring rate, shock absorber stiffness, angle of attack, tire size and many others, I think we can all understand that it is possible to damage a tire if the right combination of factors occurs.

Many times you hit something or drop into a pot hole and don't know it because the impact is small. Other times you may feel the impact but if nothing happens right at the instant of the hit, the event seems to get erased from your memory. While it is true that most of the time when you hit something no significant damage occurs, sometimes there has been damage and you may not see the result of the damage for many miles, hours or even days so you may not link the impact event with the tire failure.

If there is damage to the tire, many times the damage is limited to the tire sidewall and could be in the side under the RV so you would not observe it unless you removed the tire from the RV. Sometimes the damage can damage the tread and belts. The main reason you don't always have an immediate loss of air due to the impact is because the damage occurs to the structure buried deep within the tire. In the case of sidewall damage it is the body cord that suffers a shock load and "snaps".

Sometimes when it is the steel belts that are damaged you might have managed to bend the steel beyond its yield point so now it is kinked and experiencing a concentrated load at the location of the bent steel. 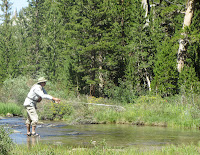 The best way to think of how you "snap" body cord is to think of fishing line. Fishing line comes in different strengths just as tire body cord comes in different strengths. There are a number of the tradeoffs with going to higher strength cord than what you expect to need. Cost, weight and flexibility are some obvious examples so the tire manufacturer just like the fisherman tries to find a balance between stronger cord and the other measurable or desirable characteristics. Even if you don't fish you may know someone that does so you can check with them on this example.

You can confirm that it is possible to catch a 10# fish using 5# rated line but it is also possible for a 5# fish to break a 10# line if the fisherman doesn't play the fish properly and there is a shock load because the fish jumped or the fisherman jerked the line too fast. The same thing happens with the cord in the tire. A cord that would normally be more than strong enough can be snapped if all the conditions as named above happen to result in a shock load.

Here is an example to the left.

This tire was labeled "defective" as the owner saw the bulge in the sidewall but did not remember hitting anything. However I noted the witness marks on the rim (arrow) where the tire was forced down over the rim, leaving black marks on the rim, so I did additional investigation. I discovered broken body cord on the inside of the tire, as seen below right 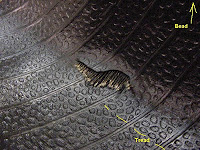 Here, below left, is a close-up showing damage to the outside of the tire at the exact location of the broken cord on the inside. 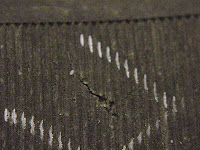 Now once the cord is broken the tire may continue to hold air with the remaining unbroken rubber as seen in the above picture. Only some time later when the rubber is heated up from driving at highway speed does the force of the inflation air exceed the decreased strength of the rubber. This delay can easily occur if the damage occurred shortly before you parked the RV for an extended stay at a campground. Days later as you pull out you would have completely forgotten about the deep pothole you hit as you turned off the freeway a mile from the campground. The result is a rapid loss of air. This event is often considered a "blowout" by the driver. A TPMS will not provide advance warning of the sudden failure because there was no loss in pressure till the rubber sidewall tore open.

Tire engineers experienced in root cause analysis can sometimes find the evidence that established that there was an impact that ultimately lead to the sudden loss of air. Other times the less experiensed will jump to the erroneous conclusion that the tire was "defective" because they do not know the tell-tail signs to look for or really aren't inquisitive enough to make a sufficiently detailed examination.

I hope this example demonstrates how it is possible for the owner to arrive at the wrong conclusion of what really caused the tire failure.

BOTTOM LINE
Discovering the real "root cause" of a tire failure requires detailed examination of all the evidence. Seldom is the RV owner in the mood to spend an hour or so examining the tire or he may not have the equipment needed to examine it in sufficient detail to arrive at the real answer.
Posted by Tireman9 at 3:30 PM