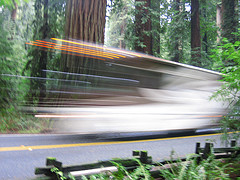 Finally.
If you tow a trailer that has ST type tires you need to remember that they are rated at 65 mph maximum. A few trailers come with commercial tires that are only rated to 62 mph. So your maximum speed is based on the lowest rating of all your tires.
Posted by Tireman9 at 9:34 AM