A person mentioned that both rear duals tires got hot due to air loss and subsequent overload. One tire was identified with a leaking valve and was replaced but there was no suggestion that its mate might have also suffered internal structural damage from running hundreds to thousand miles in an overload condition.

Few tire dealer salespeople or even tire technicians have the training to see the tell tale signs of overload.

Here is a picture I call "Shades of Black". 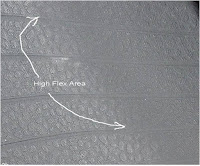 We know the tire in the picture was run overloaded as it had an improper repair (plug) and had continued to slowly leak air for many hundreds of miles. By "reading" a tire when doing a true forensic level examination the experienced tire engineer will notice the darker inner sidewall portion of the tire. This darker shading comes from increased level of flexing that can occur when run in overload or under inflated condition. The darker black is physical proof that the subject tire had been operated for many miles while under significant overload.

This operation resulted in degradation and weakening of the tire's structure which meant that in all probability, it could fail catastrophically with little or no warning hundreds or thousands of miles later.

This type of structural weakening is not visible from the outside and is difficult to see even with a proper inspection of the inside of the tire which takes more than the few seconds most tire techs are given to do an inspection.

I don't expect the magazine writer to know this but when responding to complaints about tires I strongly suggested that they touch base with tire technical resources and to provide a little education to readers.

When one tire in a set of duals is run "flat" i.e. more than 20% under inflated, it means the mate was also operated in an overload condition. Unless there are some special circumstances, the operator seldom knows how many miles, at what speed, at what % overloaded the tire was operated. Only the most experienced tire engineer and not tire store personnel, have the training necessary to pass judgment of the probable condition of the tire. Many times the mate to the "failed" tire should also be replaced or retained as a spare for temporary use.

Failing to warn readers of this potential safety issue is not a good policy.
Posted by Tireman9 at 6:05 PM